An article about magic AND chocolate? It doesn’t get much better than this…

The first time chocolate was mentioned in the Harry Potter series, Harry didn’t get to eat it at all. On a birthday trip to the zoo, Piers and Dudley enjoyed chocolate ice creams, whilst Harry was begrudgingly bought a cheap lemon ice lolly. Harry was treated as an outsider by the Dursleys long before he knew how different from them he really was. Thankfully, chocolate tracked Harry’s development and entry into the wizarding world – once he found where he truly belonged, it wasn’t long before chocolate was a way that people showed him friendship and, ultimately, love.

The start of the change arrived with Rubeus Hagrid on the night he finally gave Harry his Hogwarts letter. As well as the staggering news that Harry was a wizard, he also brought the Boy Who Lived a sticky chocolate cake for his eleventh birthday. Then not long afterwards, in a mirroring of the scene at the zoo, Hagrid bought Harry an ice cream in Diagon Alley when they went to buy his school supplies. No lemon ice lolly this time – Hagrid bought Harry chocolate and raspberry ice cream with chopped nuts. Already, Harry was allowed chocolate in this strange new world he supposedly belonged to, and it was being bought by someone who cared about him, rather than by the Dursleys who – given half the chance – wouldn’t have bought him that ice lolly at all.

Then Harry boarded the Hogwarts Express to his new wizarding life and chocolate appeared again. Harry shared his purchases from the trolley witch with Ron, but arguably it wasn’t until sharing the Chocolate Frogs that they really bonded. Ron relaxed as he explained all about Chocolate Frog cards and marvelled over Harry revealing that in Muggle photos the subjects stayed put. By the time Draco Malfoy turned up in their compartment and announced, ‘You’ll soon find out some wizarding families are much better than others, Potter. You don’t want to go making friends with the wrong sort. I can help you there’, Harry and Ron were already united against him. 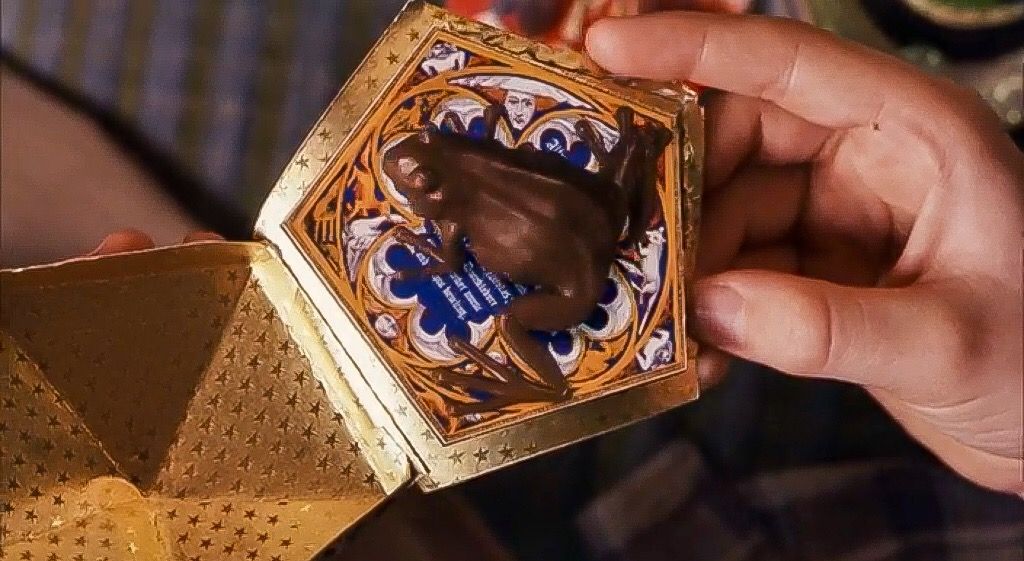 As the years went by, chocolate was a gift given and received by Harry in friendship and love on many occasions. During Christmas of his first year, Harry received Chocolate Frogs as a gift from Hermione – a representation, perhaps, of the fact that Hermione was now Harry’s friend too, alongside Ron (who had shared his Chocolate Frogs when the boys first met). One poignant moment was when Mrs Weasley sent Harry a ‘handsome chocolate egg decorated with small, iced Snitches’, including him amongst her own family members.

Chocolate as a remedy

Aside from a way to show love and friendship, chocolate was also used as a remedy in the wizarding world: a remedy against some of the gravest creatures ever to darken the pages of the Harry Potter books – the Dementors. J.K. Rowling told us, ‘the mood-enhancing properties of chocolate are well known in both the Muggle and wizard worlds. Chocolate is the perfect antidote for anyone who has been overcome in the presence of Dementors, which suck hope and happiness out of their surroundings.’ We saw the remedy in action when Dementors entered the Hogwarts Express in Harry Potter and the Prisoner of Azkaban: ‘A loud snap made them all jump. Professor Lupin was breaking an enormous slab of chocolate into pieces.’ Madam Pomfrey was very impressed by the new addition to the Hogwarts teaching staff – ‘So we’ve finally got a Defence Against the Dark Arts teacher who knows his remedies’ – and once we got to know him, we were too!

Chocolate might have helped guard against some of the effects of a Dementor attack, but people’s love of chocolate did cause some problems in itself. Remember when Romilda Vane spiked those Chocolate Cauldrons with love potion? Poor Ron really didn’t see it coming – who could blame him for eating the delicious treats? Hermione, too, played on the general love of chocolate, when she filled chocolate cakes with a sleeping draught, which were soon devoured by Crabbe and Goyle. A lesson here that in the wizarding world, not everything was always as it seemed – not even chocolate. 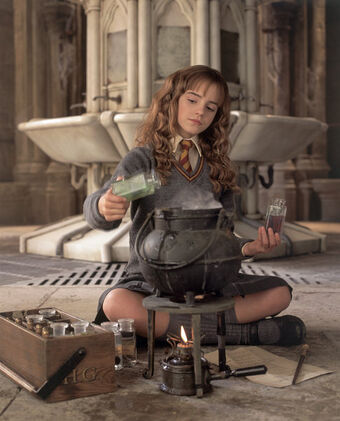 These incidents aside, chocolate in the wizarding world ultimately became something that gave comfort, both to Harry and to others. Perhaps, in Harry’s case and other Hogwarts students brought up by Muggles, it was the familiarity of chocolate – aside from how delicious it is – that brought them comfort. It didn’t matter that they were eating Chocolate Frogs rather than just a plain old Muggle chocolate bar; chocolate was something familiar, something they could relate to, in a world that was so startlingly different from the Muggle one they’d grown up in.

But it wasn’t just wizards brought up by Muggles who found comfort in chocolate. When Draco Malfoy put a Leg-Locker Curse on Neville Longbottom and he choked out, ‘There’s no need to tell me I’m not brave enough to be in Gryffindor, Malfoy’s already done that,’ Harry gave Neville his last Chocolate Frog to try to cheer him up. And if you still don’t take our word for the comforting power of chocolate after all this, perhaps Albus Dumbledore could persuade you. After Ginny Weasley was rescued from the Chamber of Secrets, Dumbledore declared there would be no punishment and that she should be prescribed some hot chocolate: ‘I always find that cheers me up,’ said the greatest headmaster Hogwarts ever had.